Looking back on old stuff we considered important (or fun) enough to show everybody first thing when they reached my Home Page...

Thanks to our "mean" system managers, my WWW page long-time URL hasn't been reachable for a few months now, so I decided to provide here a NON-UPDATED mirror to the vast audience eagerly wanting to know about me:-) While, again due to so-called security measures, some features of the original page are not available here, most things work! Enjoy, then, and let's hope the future will bring us peace, of course, love, maybe, but also "nicer" system managers willing to do their job and thus let us do ours!

Roger Waters, The Bravery Of Being Out Of Range, from "Amused To Death", 1992

It sometimes seems rather shallow to keep talking about Xmas when there's a
dangerous, deranged and deluded idiot with his finger on some very dangerous
buttons. And yes, that's George Bush I'm talking about, not Saddam.

It's now clear that our "mean" system managers really like "shutting down" web pages without any prior advice. Thus, once again my WWW page long-time URL hasn't been reachable for a few weeks now! Please patiently wait while I find a way to overcome the limitations imposed on my institute's official web server due to institutional so-called security measures.

Thanks to the collaboration of our system managers, my web page is now fully functional! My most sincere apologies go to those whom my previous (and, following a long-standing www tradition, definitely flaming) message may have offended.

My days in Padova seem to be over! In (tentatively) early November, I'll be moving to London and start working within the Astrophysics Group of Imperial College on a two-year PDRA contract focusing on Extragalactic Infrared Astronomy with ISO/SIRTF/Astro-F and on Herschel Software Development!

Breaking News: on 3rd November, I'll be flying to London (on a RyanAir plane, thus any finger-crossing on your part will be gratefully acknowledged:-) to start my PDRA within the Astrophysics Group of Imperial College!

It was all, as I was warned at the very outset, one "bel casino".
And standing there, drenched by the rain, I realised that I didn't
want to live, couldn't even imagine living, anywhere else.

Tobias Jones, "The Dark Heart of Italy: Travels Through Time and Space Across Italy", 2003

Waiting for Mr. Bush to come and meet Mr. Blair here in London...

For technical problems (hopefully) soon to be solved, you'll find that some features of my recently-moved web page won't work! Sorry about that...

Thanks to Helen, my web page is back at full speed! 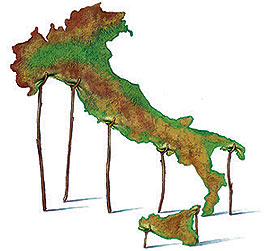 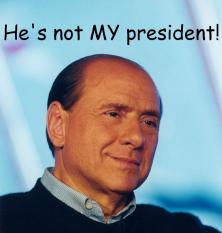 Tobias Jones, "The Dark Heart of Italy: Travels Through Time and Space Across Italy", 2003

Political language is designed to make lies sound truthful and murder respectable, and to give an appearance of solidity to pure wind.

The man who tires of London tires of life.
For there is in London all that life can afford.

Leaving London and back to Montebelluna/Padova "for a while"... no comment, folks!;-)

And in case you wondered...

It is all too easy to attribute to the political class, both of left and right, the sole
responsibility for the failures of a State or a society. In the last analysis, the strength
of a democracy in a single country does not depend only upon the capability or the integrity
of its ruling elite, but also upon the culture of its families and the energy of its citizens.

Just when even I thought we wouldn't ever go back "there"...

Berlusconi will probably fail: his own incapacities, the mediocrity of his government,
resistances both passive and active, and - last but not least, the economic conjuncture,
seem likely to bring him down in the national elections of 2006. But the political and
cultural trends of which he is one of the most striking expressions are here to stay,
and they weigh heavily upon our collective democratic future.